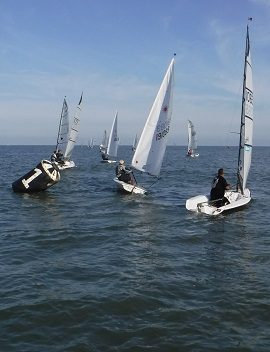 North West Norfolk Week started from the idea of Oliver Atkins and Lionel Wilkinson, who suggested that the coastal clubs between Brancaster and King’s Lynn should pool their resources and organise a regatta that involved all the clubs in the area. In the post-war austerity of 1948/9 it was also conceived as an event which could fit in with a family holiday in a very attractive and unspoiled area of the country. This ethos still prevails at Norfolk Week - a competitive but fun family event. 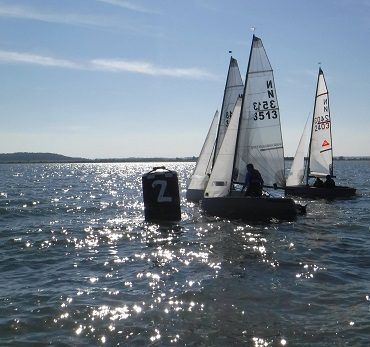 The 1949 regatta had fleets of National 12s, International 14s and Fireflies, these have changed over the years as sailing has evolved and fashions changed, the intervening years seeing Enterprises, Fireballs and OKs coming to prominence during the 1960’s. North West Norfolk Week was one of the first regattas, with the support and encouragement of the Laser Association, to introduce class racing for Lasers in the 1970’s. As dinghy classes have diversified the handicap (PY) fleet was introduced and has become increasingly prominent. The 1990’s have seen a consolidation into fleets of National 12s, Lasers, Enterprises and fast and slow handicap boats, with additional fleets for handicap entries with 5 or more in one class.

Hunstanton and Snettisham Beach SC’s are situated in the Wash offering large open sea courses. The Ouse Amateur Sailing Club in King’s Lynn offers tidal river racing with smaller waves and BIG tides. The largest coastal salt marshes in the world stretch between Brancaster Staithe and Blakeney, carved into which are various natural harbours and creeks. These provide a further range of courses, some on the open sea, some in estuaries, some in both!

As varied as the sailing are the facilities offered by the host clubs - egg and bacon baps at Wells, waiter service at Brancaster Staithe, the Ouse ASC clubhouse (literally) over the river in King’s Lynn with its magnificent breakfasts and real ales to name but a few. All entrants are honorary members of all clubs for the week.

It is impossible to list all the aspects that give North West Norfolk Week the character that it has. Suffice it to say that it produces an event unique in the sailing calendar. One race per day, 9 in total, with 6 to count provides a good balance between sailing and holiday, short tidal windows mean there are no long postponements, so plenty of time for the family to spend on the beaches. The racing is as competitive as any but the atmosphere friendly and relaxed. The sailing is both interesting and challenging, the venue one of the most beautiful areas of the country and the company good. Be warned though - it is extremely addictive! Most people having been once will return year after year, and, if you are a real glutton for punishment, Brancaster Sailing Week often follows on from the North West Norfolk regatta.

Daily trophies, weekly trophies, lady and junior helm prizes mean there is something for all sailors in the week. If you usually only sail at your own club why not take a chance, hitch up your boat and join one of the friendliest events in the sailing calendar, starting at Hunstanton Sailing Club finishing at Snettisham Beach Sailing Club.